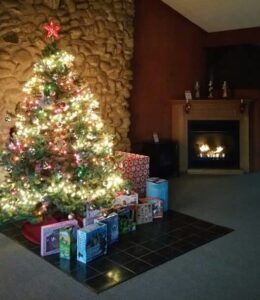 Twas that night, right at Christmas, It was cold, I recall.
Our house, was near freezing, No movement at all!

Stockings were hung, by the chimney with care, hoping
Fosters GasTruck, soon would be there!

My children were shivering, all cold in their beds, while
thoughts of some heat simply danced in their heads.

There was me in my hoodie, and Hubby in his cap, we had
started to snuggle, cause our heat was out flat! When there
on the lawn, there arose such a clatter, I jerked off those
covers to see what was the matter! Away to our window I
flew like a flash! Tore down that dang shutter and threw up the sash.

The moon on the breast of that new fallen snow, gave
thoughts to us freezing while looking below! When what to my
wondering eyes should appear, that Foster Fuel man, JIMMY BOMAR was there!

He was a silver haired driver, so quiet and slick, I knew in a
moment he’d fill our tank quick! More rapid than eagles his
courses he came and he whistled and shouted and called
they by name, Hey Gary and Donnie don’t be hiding from me!
Rick and Gaye need this completed around about three. You
can’t talk and gab, we got work here to do, Now Barry and Mark
y’all listen up too! To the top of the porch to the top of
the wall, now dash away, dash away dash away all.

As dry leaves that before the wild hurricane fly, when they
meet with an obstacle mount to the sky, so up to this house
with lots of fuels he flew, with a tank full of gas, no wait!
He brought two!

And then in a twinkling I heard in the back, your tanks been
filled man and that is a fact! I looked on ahead and was
turning around, why he had filled out my bill, here it sits in my hand!

He was dressed all warm, from his head to his foot. And guess what!
His clothes were not tarnished with ashes nor soot! He had no bundle
upon his back, he simply looked like a driver trying to help us all out!
His eyes how they twinkled, his dimples how merry, his cheeks were half frozen,
his nose like a cherry. His beautiful shaped lips were drawn down
like a bowl full of jelly. He was around 5’8 a wrought cool looking elf.
I stared when I saw him, in spite of myself.

A wink of his eye and that twist of his head, soon gave me to
know there was nothing to dread. He spoke not a lot, but went
straight to his work. He filled all my tanks and then turned
with a jerk, and laying a finger aside of his nose THEN looked
at his hands and said Darn! They half froze!

He sprang to his truck and he started to whistle as he flew
down the road like, the dawn of a thistle, but I heard him
exclaim as he drove out of sight, Y’all need auto refill!

Thanks! You guys are great to work with, I always recommend Foster!!!